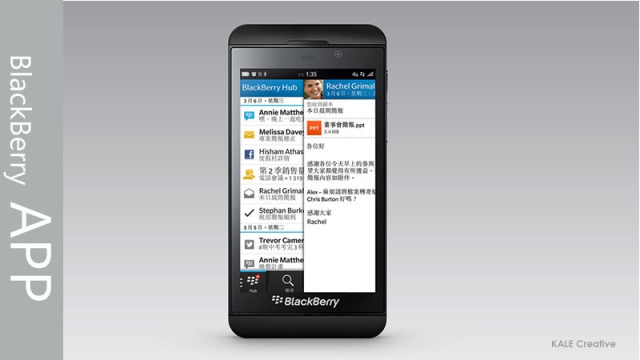 The BlackBerry is a line of wireless handheld devices and services designed and marketed byResearch In Motion Limited (RIM) operating as BlackBerry.[1] The first BlackBerry device, an email pager, was released in 1999;[2] the most recent BlackBerry devices, the Z10 and Q10, were announced on January 30, 2013. The user interface varies by model; most feature a physical QWERTY keyboard, while newer generations have relied on a multi-touch screen andvirtual keyboard.

A BlackBerry can shoot video, take photos, play music, and perform online functions such as web-browsing and emailing. They can also send and receive push email and instant messageswhile maintaining a high level of security through on-device message encryption, and are designed to function as personal digital assistants. BlackBerry devices support a large variety of instant messaging features, with the most popular being the proprietary BlackBerry Messengerservice. The BlackBerry PlayBook is a tablet computer offered by the company. The 100 millionth BlackBerry smartphone was shipped in June quarter of 2010[3] and the 200 millionth smartphone was shipped in September quarter of 2012.

BlackBerry accounts for 3% of mobile device sales worldwide in 2011, making its manufacturer the sixth most popular device maker (25% of mobile device sales are smartphones).[4] The consumer BlackBerry Internet Service is available in 91 countries worldwide on over 500 mobile service operators using various mobile technologies.[5] As of September 2012, there were eighty million subscribers worldwide to BlackBerry.[6][7] In 2011 the Caribbean and Latin America had the highest penetrations of BlackBerry smartphones worldwide, with up to about 45 per cent in the region having a RIM device.[8]

BlackBerry, iPhone, Android, and Windows Phone are considered the four major smartphone brands. BlackBerry was widely referred to as "CrackBerry" in the United States, which alluded to its excessive use by its owners and is a reference to the addictiveness of crack cocaine. Use of the term CrackBerry became so widespread that in November 2006 Webster's New World College Dictionary named "crackberry" the "New Word of the Year."[9]