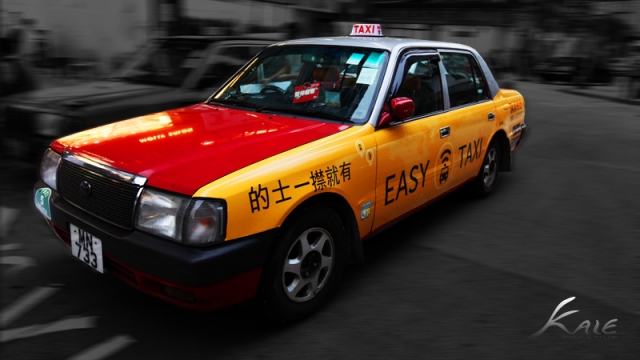 Hong Kong taxi are operated for 24 hours every day and served for many hot areas, such as Shopping Centre, Estate, Hospital, Industrial or Commercial Area, they also serve for some areas that other large transportation vehicles could not go, moreover the taxi advertising rate is very competitive, it is very suitable to do a big AD compaign to target different audiences at widea area!
Most taxis are independently owned and operated, but some are owned by taxi companies, and the drivers are employees.

The taxi trade is regulated by the Government, as are the fare scales. Taxis need a license to operate in Hong Kong. The government stopped issuing licenses in 1994, when there were a total of 18,138 in the territory. Existing licenses are transferable, and are traded on the open market, which is rising steeply. The going cost for a license is around HK$5 million.[6]

The service area of the three types of taxis are defined by the Government in the 1960s.[7] The need for the three different types was to avoid clustering of taxis in the more populated/profitable areas of the territory, and a shortage in others.[8] All three types of taxis serve Hong Kong International Airport and The Disneyland Resort.

Flexible Ad Period!
AD Period is Flexible! It is possible to customize the Ad period from 1 month to longer!
Urban Taxi (Red Taxi)

The red taxis have the highest fares among all, and serve all areas of New Territories, Kowloon and Hong Kong Island. They may also run Tung Chung (Lantau), the Airport at Chek Lap Kok (Lantau) and Disneyland, but are not permitted to run the rest of Lantau Island. These taxis can only carry passengers in the Lantau or New Territories areas if the passengers are returning to Kowloon or Hong Kong Island, or must return to their service areas themselves to continue their business. A taxi will sometimes appear with its roof light on, but with the 'For Hire' flag covered by an 'Out of Service' sign; this means they are attempting to catch a fare back across the harbour tunnel.

There is no legal requirement for drivers to know all the destinations in their allowed area. Commonly, drivers refuse to take passengers wanting to cross the harbour on this basis, although in theory drivers do not have the right to refuse a hire based on destination. On both sides of the harbour, the Government has erected taxi ranks catering for those returning taxis prepared to crossthe harbour for a single-toll trip.
New Terriories Taxi (Green Taxi)
The green taxis, the second most expensive, serve only parts of the New Territories, including Sha Tin, Tuen Mun, Yuen Long, Fanling, Sheung Shui, Pak Tam Chung, Tai Po, West of Ting Kau and North of Chuen Lung, except Lantau Island, Tsang Tai Uk, Sai Kung, Tsuen Wan, Kwai Chung and Tsing Yi. They are allowed to serve the taxi stands at Prince of Wales Hospital, Hin Keng Neighbourhood Community Centre, Chak On Estate, HKUST, Tseung Kwan O Hospital, Hang Hau Station, Tsing Yi Station and Tsuen Wan Station, which are designated interchange with red taxis. Although they serve the Airport and Disneyland, they do not serve Tung Chung and the rest of Lantau.

A brief comparison for your reference*:

*It depends on the actual route and Ad location

What we could offer?

We cooperate with large & reliable Taxi companies, that's why we can make sure our selected Taxi are also in good quality in the Ad period!
Our Body Ad is using high quality Body Ad sticker, Seatback Ad is using high quality material with strong foamboard or sticker, they can ensure that your Ad content can be shown extremely clear and the Ad can last for long period...
*All logos and trademarks are the properties of their respective owners